A tympanometer is a diagnostic tool used by ENT physicians to evaluate the condition of the middle ear, movement of the eardrum, and ear bones by emitting fluctuating air pressures inside the outer canal.

Oftentimes, people confuse tympanometers with audiometers, which complement each other but do not serve the same purpose.

In short, tympanometers are not devices to diagnose hearing loss but may help determine the etiology of that impairment.

The main advantage of using this device is its non-behavioral property, which means that it will let the physician know about the middle ear function without any voluntary compliance from the patient.

In this article, we will cover the history, mechanism of action, indications, and leading brands of tympanometers.

The first tympanometer was developed by Terkildsen et al in the 1950s to estimate air pressure inside the middle ear.

Throughout the decades, many physicians and surgeons modified the initial design to create a more resilient and accurate tympanometer.

In 1969, a Swedish doctor by the name of Gunnar Lidén introduced the classifications of tympanograms in The Journal of Laryngology and Otology based on their shapes (e.g. A, B, C).

After years of using this device, the clinical importance and diagnostic results provided were undeniable, and it has become a routine part of an ENT examination. 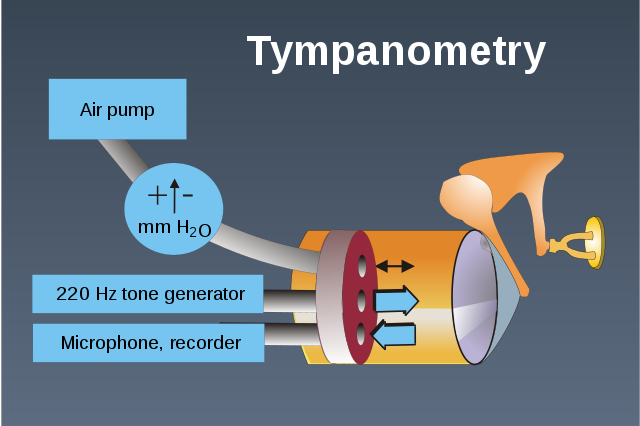 The main assumption behind tympanometry is that air pressure is even on both sides of the eardrum in a healthy ear.

This physiological property is crucial to optimize the efficiency of sound transmission, as any changes in air pressure would create a gradient between the outer side of the eardrum and the inner side, which leads to a proficient tympanic movement that stimulates the auditory Ossicle.

When the physician uses a tympanometer, the device will seal the outer canal from the external environment and apply different pressures relative to room air pressure.

The process will fluctuate between negative air pressure, room air pressure, and positive air pressure. After that, the device will release a tone at a constant level (226 Hz), and then detect the sound bouncing off the tympanic membrane using an extremely sensitive microphone.

Using all of this data, the device will print a graph known as tympanogram, with two main components:

The normal tympanogram resembles a “tent”, where the least amount of sound bouncing off the tympanic membrane is at room air pressure.

The reason behind this is simple.

Positive or negative air pressure inside the middle ear is a sign that something is wrong.

The main brands of tympanometers

The World Health Organization stated that over 1.1 billion people around the world suffer from a type of hearing impairment due to environmental factors.

This led to the exponential growth of the tympanometer market demand.

Several companies are merging to take over a larger piece of the market, with a steep competition between the big players.

Here are the market-leading companies when it comes to tympanometers:

A recent report published by Fortune Business Insider took a comprehensive look at the tympanometers market today and published a forecast of market growth in the near future (2026).

The report stated that the need for tympanometers is highest in North America, but other regions around the world (e.g. Europe, Asia) are seeing more cases of hearing impairment every year due to noise pollution, which is predicted to influence the need for these devices in the aforementioned regions.

As mentioned earlier, the main indication of tympanometry is to determine whether the pressure is equal between the outer canal and the middle ear.

ENT physicians often use this device to help diagnose or rule out certain medical conditions. Moreover, family medicine doctors and other physicians are using tympanometers in the annual checkup to evaluate the function of the middle ear.

Here are the four main indications to use tympanometry:

During the early stages of otitis media, the eardrum is sucked in medially, creating a negative air pressure environment inside the middle ear.

As a result, the tympanogram will show a type C graph where the least amount of sound bouncing off the tympanic membrane occurs when the tympanometer creates a state of negative pressure.

In other words, the outer canal must be in a negative air pressure to boost the efficiency of sound absorption by the eardrum.

Fluid accumulation in the middle ear

Fluid accumulation inside the middle ear dysregulates the pressure gradient between the two sides of the tympanic membrane.

This condition occurs during the late stages of otitis media, where fluid and pus build up inside the middle ear.

Consequently, the curve seen on a tympanogram becomes flatter since no degree of pressure can change the amount of sound bouncing off the eardrum.

The tympanogram will show a type B graph.

The tympanogram may show a type B-high graph.

To visualize the graphs for a better understanding, you can head to this article published by the American Academy of Family Physicians.

There are a few contraindications to performing tympanometry, including:

Furthermore, extra care should be taken when a vestibular dysfunction from trauma (perilymphatic fistula) is suspected due to vertigo/nausea that occurs with air pressure changes.

Tympanometers are fairly safe and no complications have been reported.

Before the procedure, your physician will use an otoscope (insert link of the otoscope article) to see whether the outer canal contains any earwax that may disrupt the sound vibration created by the tympanometer.

Aside from a slight discomfort felt by the patient, these devices are safe.

In an attempt to find a simple, inexpensive tool to diagnose Eustachian tube abnormalities, scientists conducted an experiment where they compared conventional tympanometers to eustachian barotubometers.

They found that the latter offers similar results with the additional benefits of affordability and availability.

Tympanometers are an essential part of a comprehensive ear examination to allow your ENT physician to detect any potential abnormalities.

This device is non-invasive and gives doctors an internal estimation of the middle ear function without the need for surgery and other invasive procedures.

Hopefully, this article helped you appreciate the importance of tympanometers and the way they work since many people find it too complex to understand.